Superior Court Judge Kathleen McGuire announced yesterday that she will retire from the bench as of April 2.

‘I’m fully vested in my retirement, and I have a lot of other things that I’d like to do,’ said McGuire, 61. ‘I’m still young enough, very healthy, and so it seems like a good time to pursue some other interests.’

McGuire, who lives in Hopkinton, said she plans to teach, to do some part-time arbitration work and ‘to spend a lot more time playing golf.’

McGuire will be on ‘senior active status,’ which means she can still sit as a judge if the court asks her to fill in. In a letter to Gov. John Lynch, McGuire wrote, ‘I have loved the intellectual challenge of being a general jurisdiction trial judge and the energy generated by busy dockets and jury trials. At the same time, I have striven to appreciate the responsibility that comes with making daily decisions that impact the lives of those who appear before me.’

Colin Manning, spokesman for Gov. John Lynch, said the governor thanks McGuire for her service. The judicial selection commission makes recommendations to the governor for judicial nominations, and Manning would not say when or if the seat would be filled.

‘We just got the letter this afternoon, and we haven’t discussed a timetable,’ Manning said.

McGuire’s retirement will drop the superior court system from 22 to 21 judges, including four who were just confirmed last fall.

McGuire has been an associate justice for the superior court since 1989, sitting in Merrimack, Hillsborough and Belknap counties. She previously served as a prosecutor and chief of the criminal justice bureau at the state attorney general’s office. She clerked for the state Supreme Court in 1984 and ’85, after earning her law degree from Boston College Law School.

On the bench and off, McGuire earned a reputation for toughness.

‘If you had a hearing before Judge McGuire, you knew she was ready. She had read the file and was familiar with the case,’ said Chuck Temple, who runs the criminal practice clinic at Franklin Pierce Law Center and also tried criminal and civil cases before McGuire while in private practice.

Temple said McGuire demanded that the lawyers be as prepared as she was.

‘She expected when you walked into that courtroom, whatever type of hearing it was, you’d be prepared to address any and all issues that would arise,’ Temple said.

McGuire presided over several high-profile criminal cases. In 2008, she judged the trial of Michael Addison, who was sentenced to death for the murder of Manchester police Officer Michael Briggs, in the first application of the death penalty in New Hampshire in recent memory. Assistant Attorney General Jeff Strelzin, one of the prosecutors in the Addison case, called McGuire ‘very meticulous and well prepared, an extremely fair judge.’

McGuire judged the trial of Joseph Whittey, who was arrested and convicted 18 years after he raped and murdered an elderly woman in Concord. The case was prosecuted by now-state Attorney General Michael Delaney.

Attorney Jim Rosenberg, a partner and vice president at Shaheen & Gordon, prosecuted two murder cases before McGuire. In the case of James Hall, who was accused of strangling his mother in a Concord apartment, McGuire presided over Hall’s second trial, after a conviction before another judge was thrown out by the state Supreme Court. She had to deal with questions about publicity of the first trial and whether new evidence could be introduced that was not raised the first time.

‘She had the ability to wrap her arms around a complicated set of facts,’ Rosenberg said.

In the case of Dwayne Thompson, who killed his roommate with a hatchet, McGuire had to examine scientific issues such as the reliability of a certain type of DNA testing. ‘Judge McGuire in a very short window of time wrapped her arms around the science, the facts of the case and the law that applied to it in order to churn out an order that ultimately was upheld by the (state) Supreme Court,’ Rosenberg said.

Despite the high-profile cases, McGuire said she often found civil cases ‘even more interesting.’ Particularly while serving in Merrimack County, where she was often faced with cases in which the state was one of the parties.

‘What I enjoyed most about the job was the great variety of cases that I handled on superior court,’ McGuire said. ‘I found that very intellectually challenging.’

McGuire was committed to alternative sentencing and founded the Merrimack Academy program, a yearlong program of intensive probation that includes life skills classes and substance abuse treatment, along with close monitoring.

‘She was willing to give people an opportunity to go into diversion programs or the academy program and change their lives, remove themselves from the criminal system,’ Temple said.

Daniel Lynch, who worked as deputy clerk in Merrimack County while McGuire was there, said McGuire ‘developed numerous innovations to resolve cases more efficiently.’ For example, she created the plea status conference, where lawyers met early in a case to discuss whether the case would be likely to plea or go to trial. The conference allowed lawyers to either quickly approve a plea deal and set a sentencing date, or to agree on a trial date.

‘She was outstanding at getting counsel to face the realities of their case and to consider what resolution would be in the best interest of both victims and defendants,’ he said.

William McGraw, Merrimack County Superior Court clerk, said McGuire was tireless in her efforts to find a better, more efficient way of operating the court. ‘She was hard to work with because she demanded a lot of everyone who worked for her,’ McGraw said. ‘She brought out the best in people and made them do more than they felt they were capable of doing.’

Leader of the Court

‘She’s a competitor at every level,’ said attorney Marty Van Oot, a longtime friend of McGuire’s. ‘It doesn’t matter what the sport is. You tell her what the rules are, she plays to win.’

She also has a sense of humor. At a retirement party for court clerk Dana Zucker, McGuire, together with Zucker’s staffers, donned a black cocktail dress and performed a parody song, ‘Leader of the Court,’ according to the Laconia Daily Sun.

In addition to her work on the bench, McGuire has been involved in numerous other causes. She helped found Dress for Success in Concord, which provides professional clothing for low-income women, and remains on its board of directors. She is on the board of directors of the New Hampshire Institute of Furniture Making. She has taught at the National Judicial College in Nevada, and she is chairwoman of the New Hampshire chapter of the Russian American Rule of Law Consortium, a group that has run an exchange program with lawyers and judges in New Hampshire and Vologda, Russia, since 1998.

Bjorn Lange, assistant federal public defender and a volunteer on the New Hampshire-Russia program, said McGuire has traveled to Russia many times.

‘She’s been consistent in keeping that partnership going,’ Lange said.

Over time, Lange said, the Russians have become more open in dealing with the Americans. ‘A lot of it is due to their personal respect that judges and lawyers had for (McGuire),’ he said.

McGuire said she still plans to continue some of her outside activities, including the Russia partnership. 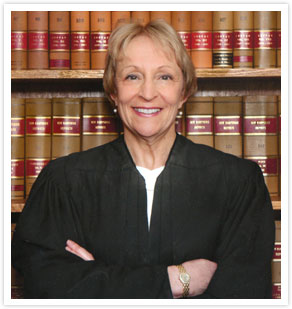